skip to main | skip to sidebar

Ramblings and thoughts by a Mensch or two.

So, WAS I ready for the baby?

There is a baby, and now sleep is a valuable commodity. One may note I haven't posted much on this blog recently--well, writing simply didn't rate against the possibility of sleep.

But, I have a small amount of extra energy this morning, so here are a few thoughts on early parenthood:

At first, it wasn't so bad. My mother-in-law came out from Texas to help, and this was crucial to our continued sanity. Raising an infant past the first two weeks really takes the full time efforts of no fewer than three people, unless you're really lucky or you don't mind letting the poor thing cry. There was at least one night that was very long and stressful--no sleep for either of us--after which we were able to pass our new blessing on to her grandmother for some much needed rest. The rest of the time our house was magically and wonderfully cleaned, breakfast was prepared for us, and laundry went through the machines at a seemingly constant rate. But all good things come to an end, and grandma had to go home; luckily we'd managed to build up a bit of a routine by then, and we're still managing. Though I'm working only half time, from my system at home, so I'm still putting a lot of daddy-time in.

But how has it changed me, or the way I look at things? Aside from attitudes and feelings attributable to sleep deprivation, there aren't any earth-shaking changes to my outlook. Sure, I used to be scared of diaper changing, and now it's really not a big deal. You get over it, eh? But that doesn't strike me as a sign of a major life change. There are the profoundly satisfying moments of connection with my new daughter as she stares into my eyes in a rare quiet-and-awake moment, and there is an awareness growing that the responsibilities for this new life will be with me for a Long, Long, Time. But fundamentally, I feel like the same me I was a couple months ago.

On the other hand, I suddenly have a lot more to talk about with other new parents. Some of my friends don't have children, and when I mention poop color or number of diapers or amount of sleep they look at me rather oddly and try to change the subject. It's easier to hang out with my friends who have children for other reasons as well--if a baby cries, we can look at each other with understanding.

I've known some single folks who look at child problems and responsibilities with a mixture of disgust and pity, so treasuring their freedom that they can't understand wanting to have a child around. But I feel that the rewards are worth the trouble, and that it isn't a sacrifice we're making but an undertaking of monumental proportions with a wonderful prize at the end. Even if that prize is only a smile, for the time being. And even if the smile came about only because of a satisfying poop. It's really only an echo of things to come, as I see it. And I don't just mean more poop, though I expect that will be along shortly as well.
Posted by Tim Mensch at 10:36 AM 1 comment:

We have a baby!

Petra Katharine Mensch was born at 7:04am at Alta Bates in Berkeley. She weighed in at 6lbs., 11oz., and is absolutely beautiful. I plan to talk more about the birth and the first years at my family blog. 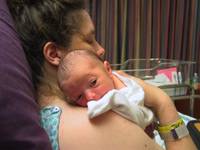 Petra (aka the Menschkin) and mommy.

Posted by Tim Mensch at 4:09 PM No comments: