skip to main | skip to sidebar

Ramblings and thoughts by a Mensch or two.

PlayFirst has a Dream... 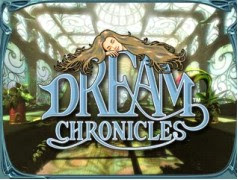 I don't normally post here to about my company's products, but this one is special--at least if you're one of those people who enjoyed playing Myst. It's called Dream Chronicles, and it seems to be universally addictive. Better yet, they gave me a coupon code for 1/2 off the price ($10 off for those of you not familiar with PlayFirst games) that I can give out to up to 200 of my closest friends. Our last big release, Chocolatier, is also doing well, and I recommend trying it if you like the idea of trading games, and you like chocolate.

If you read this before the code expires on June 18, then drop me an email (see the bottom of this page) and I can send you a code. I personally think this is the coolest Myst-style game to hit the streets since, well, Myst itself--but that's only my opinion. Let me know whether you want the Mac or PC code--they're different.

Here are the game details:

You are getting very very sleepy…..

Imagine waking up from a deep sleep to find your husband missing and your daughter and the entire town under a sleeping spell. Unsure of what to do, you begin to notice that your surroundings seem strangely surreal and otherworldly…there are clues, scattered throughout town like breadcrumbs, apparently left by your missing husband. Put the clues together and overcome the obstacles in your path and you might discover what happened to your family and friends, as well as your husband’s mysterious past. If the clues are not all found, the sleeping spell may last forever and your husband may remain missing. Then again, what if it is all just a dream?

The opinions expressed above are mine, and even though I mentioned PlayFirst, I am still writing this as an individual and not as a representative of PlayFirst, Inc.
Posted by Tim Mensch at 10:55 PM No comments:

What kinds of places am I looking for? Well, I have a bit of a liberal bias, so solidly red states aren't that interesting. I grew up in California, so places with good climates certainly need to be considered. High humidity is a show-stopper for me--I shut down if it's really hot and humid--but I'm willing to try living in a place with occasional snow. I do like the idea of being somewhat close to a metropolitan area--I'm not willing (yet, anyway) to live 2+ hours away from the nearest airport and/or large city, given the likely isolation that would impose. And, as I mentioned last time, I'm quite wary of the consequences of global warming with respect to weather patterns and sea level.

Colorado is borderline on politics in general--with the notable exception of Boulder. I've heard Boulder referred to as the Berkeley of Colorado, and there are strong similarities. Having been there a few times now, I'd say it's close to as liberal as Berkeley, though a tad less flaky and a lot cleaner. It took a while to eliminate the Pacific Coast entirely, despite the sea-level worries. The Pacific Northwest is beautiful, and property values are much lower than in California, but what it comes down to is that I have more (and closer) family in Colorado than up north.

What else recommends Colorado? Well, they look like they're getting a mass-transit line that may end up cooler than BART. They already have good transit around Boulder County in general, though I personally favor commuter trains. The food in Boulder seems quite good, and we've found some great places to eat in the surrounding areas as well. In addition, they have a chain of health-food stores that really puts Whole Foods to shame: Vitamin Cottage locations are convenient to the locations we're exploring, and they're a genuine health food store rather than a yuppie/trendy/luxury food store like Whole Foods. Don't get me wrong, I still shop at Whole Foods--but I see the SUVs in the parking lot and the overdone wasteful packaging of items and I feel like I'm in Organic Marketing Land rather than a store actually dedicated to helping me find healthy foods.

On the other hand, I'll miss Trader Joe's. It will probably make it to Colorado someday, but until then I'll have to import my Organic Strawberry Preserves from California when I come back to visit.

Let's not forget I'm thinking about developing a community. Cohousing is a well-known and respected word there, at least among the city planners. That makes creating a community based on that formula much easier. Land is available near Boulder (though Boulder itself is quite built up) that's quite reasonably priced.

Colorado is also a very athletic state. The number of local gyms is quite impressive; snow sports are a 2-hour drive and available much of the year because of the elevation; and people really do ride their bikes all over the place. I've been biking to BART for work for the past couple years, but not really much farther; I'm hoping that will change. Of course part of the year biking won't be possible--unless they have snow tires for bicycles? But I hear that snow-shoeing is quite fun, and I'd like to give that a try.

Here's another thought for the liberals out there: I'm moving from a solidly blue state to a swing state. Suddenly my vote (if it's counted...) will contribute to making a decision instead of just being one of many "me too" votes. Advocacy would potentially make a bigger difference as well--getting out the votes of liberal neighbors has more leverage in a state where decisions can hinge on a few hundred votes.

Finally, Colorado will provide a change of scenery that just moving north wouldn't do for me. I will get to live where there's snow for the first time. The pace of life is a bit slower, or so I hear. The actual scenery is quite stunning. And the people there are pretty laid back and nice--on my last trip I ended up talking with several random strangers, and it seemed the most natural thing in the world. Far more natural than most encounters with Bay Area natives, in my experience. And that's really what I'm hoping for out of this move: A shifting of gears that slows my life down a bit, opening up more opportunities to enjoy it while it lasts.
Posted by Tim Mensch at 10:00 PM No comments: